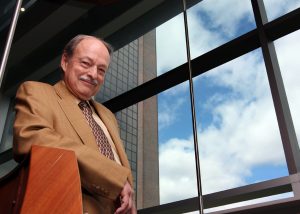 Professor Donald Beecher (Department of English Language and Literature) works earnestly at managing the size of his incredible book collection. It’s a difficult task for the man who describes himself as “an inveterate book buyer.” Beecher admits to having added over a thousand books to his collection over the past few years. But he handles the balance by donating back equal numbers of valuable volumes to  the Carleton library.

“It’s a contest to find new things in my collection still not in the library, and it’s getting harder. Finding one still needed is   like a little victory. You can make that out to be a moral victory over the self, an act of generosity, or a gesture of corporate citizenship… but I can only  smile, knowing that in fact it’s more like a game between me and the catalogue, and  I get a kick out of winning.”

Beecher began collecting as a graduate student at the Shakespeare Institute of the University of Birmingham in the 60s.  He spent time  haunting small bookshops scattered across the Midlands, and delighted in his early success: “I had some  lucky finds and actually managed  to buy a couple of collections at remarkable prices.” When Beecher returned to Ottawa  in 1972, he continued his selective buying “every  now and again with little treats.”

The game continues, with Beecher still combing his collection to “keep turning up these treasures in my library that are  not in the Carleton collection.”

Beyond hard copies, Beecher supports the Carleton Library with ongoing financial support. Last year Professor Beecher and his wife Marie-Andrée Rousseau made a significant financial gift to the MacOdrum Library, recognized with a study room named in their honour.

“The library is the heart of the university, for me at any rate, and hence I want it to thrive and prosper. I want our students to have the richest resource we can give them, and a library gift feels substantial; it has long shelf life.”

Behind The Donor Curtain:

Do you have a personal motto / credo / saying? 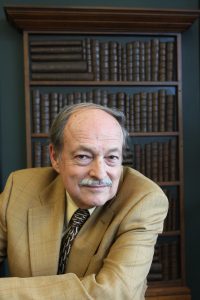 Look twice before you leap.

What profession other than your own would you like to attempt?
I would like to have been a concert soloist on the viola da gamba.

What person, fictional, living or dead, inspires you?
Saintly Ben Jonson for sheer cussedness and tenacity. He was Shakespeare’s rival and he wrote some stunningly stellar plays. But he also wrote some dotages that he tried to put on stage. Regardless, he would always come back fighting for more.

Where is your favourite spot on campus?
My favourite spot is the walkway that goes down the stairs from the quad passing between the end of the Tory building and the physics and chemistry buildings towards the new life sciences building. It’s a wonderful place to meditate. It’s as close as we come to a Philosopher’s Walk or a Monastic Garden.

What inspires you to “do good” by supporting the Carleton community?
As you come to the end of your career, you come to the realization that Carleton has been tremendously good to you. Carleton has given me the opportunities for a lifelong career in academia. I can’t think of any place I would rather put my resources back into.

Want to find out how you can help grow Carleton’s collection too? Visit the Campus Community Campaign Library Collections Project to find out more.