Here’s an update from Frank Sorenson, Team Lead of the Ravens Racing Team:

Carleton University’s Ravens Racing Team finished 13th overall out of 115 teams from ten different countries at the 2016 Formula SAE Michigan competition, which was held from May 11-14 at the Michigan International Speedway. 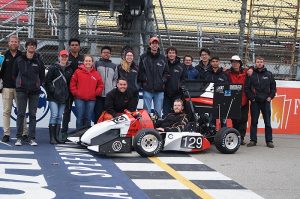 This is the team’s best result at Formula SAE Michigan since it started competing in 1999, surpassing its previous best of 25th overall in 2007. Carleton was also the highest placed out of the 18 Canadian teams that competed.

Some highlights from the competition were a 4th place finish in the gruelling 22-kilometer Endurance event, and 12th place in the Engineering Design event, both of which are Carleton’s best results in these events.

With these results, Carleton moved up 67 places on the Formula SAE/Student World Rankings to 55th out of 528 teams from around the world, and is now the top ranked Canadian team out of 24 on the list.
The team will be aiming to achieve even better results at its next two competitions: Formula North in Barrie from June 2-5, and Formula SAE Lincoln in Lincoln, Nebraska from June 15-18.

Formula SAE is a student design competition organized by the Society of Automotive Engineers. It challenges students to design, build, and race a small open-wheel formula-style race car, and features competitions in over ten countries around the world. For more information about the team and competition, see the following links: