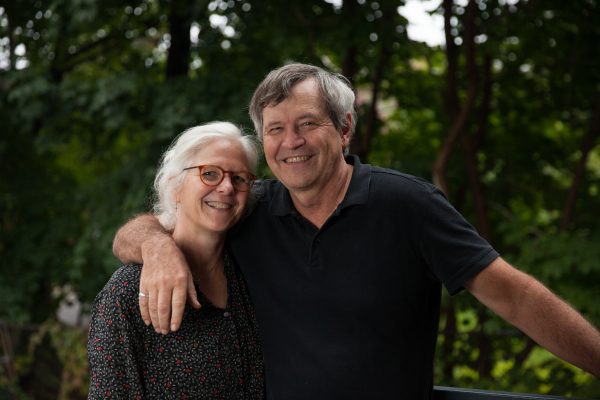 Heidi and Robert Boraks moved to Ottawa in the early 2000’s. Robert came to manage Parkin Architect’s Ottawa office. Heidi found work as a researcher with the International Development and Research Centre. Neither attended Carleton University as students. Robert completed 2 degrees at the University of Toronto, while Heidi recently finished a degree in sociology at the University of Ottawa.

This last spring, Heidi and Robert made a gift of $50,000 to Carleton’s Azrieli School of Architecture and Urbanism. Their donation was matched by the University, resulting in a $100,000 bursary directed towards graduate architecture students, specifically to help fund research-based travel. The bursary is named in commemoration of Robert’s parents, Helena and Jerzy Boraks.  “My parents came to Canada as refugees from war-torn Europe in the early 50’s” Robert said. “In coming to Canada, they were given the opportunity to restart a life in a land of peace”. By naming the bursary after his parents, Robert hopes to honour their efforts and aspirations for their family and their adopted land. When Heidi and Robert were asked why they would donate to a school that neither attended, their answer was quite simple. “We have come to learn that Carleton is a special place”.

Robert’s association with Carleton began 3 years ago when he was asked to teach a graduate design course at the School of Architecture. He has recently been appointed as an Adjunct Professor at the school while still carrying on with his architectural practice. The course he teaches is entitled – Extreme Landscapes. It is run in association with schools of architecture from McGill, Technion and Tel Aviv Universities, and sponsored by the Azrieli Foundation. The course challenges students to understand the physical and cultural forces that define some of the most challenging, environments in the world – the high arctic and the Negev desert. “We have learned that adapting to harshness can produce both resiliency and beauty – attributes which can help guide the ever increasing challenges in our own society”.

“Seeing the rapid growth in student awareness and the humility that has resulted from this exposure firsthand, I have come to realize the profound effect that research and travel can have on one’s understanding” said Robert. “Many of us had our education supported through provincial funding and education bursaries. I was one of those recipients. It feels good to be able to carry on the tradition of supporting others; Carleton is the catalyst”.