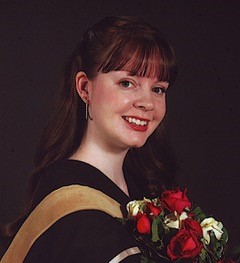 Sonya Reaume graduated from Carleton University (Sprott School of Business) in 2007 and was employed at Price Waterhouse Coopers in Ottawa. She successfully completed the three rigorous exams that every aspiring CA must undertake. When she was diagnosed with a rare form of cancer, she realized that she would not be able to return to work to complete her practical experience requirement. Sonya petitioned the Institute of Chartered Accountants to waive the remaining few months. She had worked so hard, and it would mean the world to her if she was granted the CA designation.

The Institute did grant her request on compassionate grounds. Sonya showed her pride in receiving the CA designation when she requested to have CA added to her name in her obituary. By so doing, she inspired some of her accounting professors to tell her story to accounting students so they too would be inspired to work hard to receive this well-regarded designation.

Sonya remained steadfast and smiling through many months of surgery and chemotherapy, and was grateful for the assistance provided by her parents and close friends. The cancer brought her life to a close in early 2011.

Sonya was always one of the top students in every class from high school on up. People admired her kindness, integrity, hard work and sense of humour.

Although she enjoyed her studies at school, she took part in several other activities during her teenage years. She enrolled in ballet class, went through the Girl Guide program from Brownie to Pathfinder (Canada Cord), and played competitive soccer with her Aylmer teammates in the Ottawa-Carlton Soccer League.

After high school she spent two years in the science program at Heritage College, then enrolled in the engineering course at Ottawa university. She graduated with a B.A.Sc. in 2001, and began working as a designer at Quake Technologies in Kanata. Unfortunately, the high-tech industry fell into a slump, and her small firm had to let go most of its staff. Undaunted, she decided that her mathematical abilities would serve her well as an accounting student. Once enrolled at Carleton in 2003, she continued to achieve excellent grades, enjoyed summer work as a co-op student, was the recipient of several scholarships, and upon graduation, was awarded the University medal in Commerce.