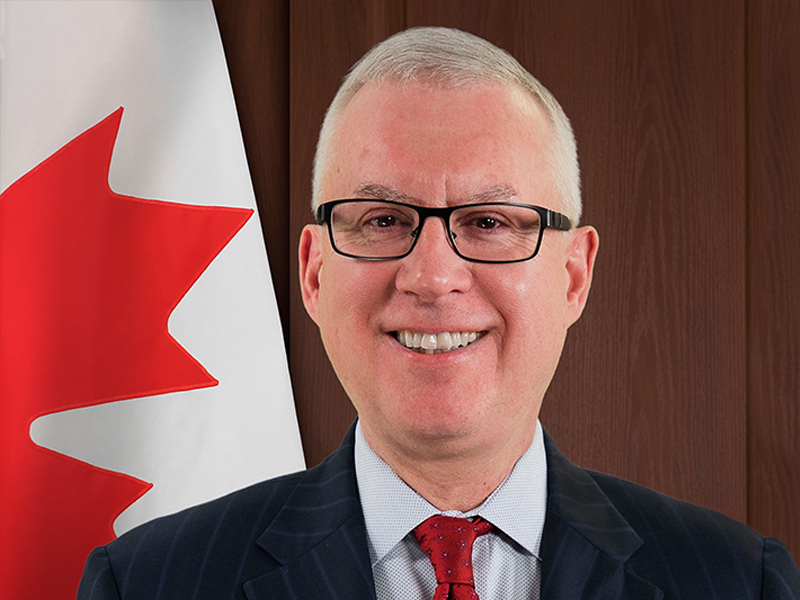 Roy Norton endowed this scholarship shortly after retiring from the Canadian Foreign Service in 2020. He credits Carleton University – and particularly his M.A. in Canadian History (1976) – for equipping him to thrive in Canada’s and Ontario’s public services.

Born in ‘Old Ottawa South’ in 1954, Roy attended Hopewell Public School and Glebe Collegiate. The fact that Carleton’s History Department was among the top ranked in the nation made the decision to ‘stay local’ an easy one.  Family circumstances necessitated part-time employment while in university – which, to a certain extent, detracted from the college experience.  His undergrad marks were okay – but not sufficient to guarantee acceptance in the History M.A. Program.

This scholarship is a measure of Roy’s appreciation to the Department for ‘taking a chance’ on him. He did very well in his Masters’ year. The course of study was rigorous; professors were helpful and encouraging; the courses he took reinforced his view that a thorough grounding in Canadian political history is integral to understanding not only the complexities of Canadian politics and society, but also the nuances of contemporary decision-making processes around ‘big’ national issues. He found the total experience so satisfying that he seriously considered applying for admission to the Department’s Ph.D. program. In the end, he put that thought ‘on hold’, opting to pursue another passion – a job on Parliament Hill.

Initially, that was as a Research Assistant for a Member of Parliament from Calgary. Then five years working in Canada’s Senate (as Legislative Assistant to the Leader of the Government or Opposition). Then another five years as Senior Policy Advisor to Canada’s Foreign Minister, responsible for files as diverse as Canada’s leadership efforts to end Apartheid in South Africa, engaging with Central American countries through the Contadora Process to end civil wars in that region, full Parliamentary Reviews of Canadian Foreign and Development Assistance policies, among others. Appreciating, as a result of his Carleton degrees, where Canada historically had been involved (or been absent) on these kinds of issues definitely assisted him in advancing sophisticated and realizable policy options.

From the Minister’s Office, Roy joined the Canadian Foreign Service – but deferred for a year, opting to ‘replenish’ by way of a Master’s in Public Administration at Harvard’s Kennedy School of Government. He then assumed his first foreign service posting (as First Secretary – Economic) at Canada’s Embassy in Washington, D.C., where, among other things, he was a member of our negotiating teams for the Intellectual Property and Investment Chapters of NAFTA. While at the Embassy, he took night courses in international economics at Johns Hopkins University’s School of Advanced International Studies (SAIS) in Washington, earning a Master’s in International Public Policy. The SAIS experience, on top of the recent Harvard one, rekindled Roy’s interest, from his Carleton days, in doing a Ph.D.  And so, at the end of his Embassy posting, he resigned from the Foreign Service (some friends thought he was nuts!), and enrolled in SAIS’ Ph.D. program in international relations, graduating in 1999. Some funding from SAIS plus a SSHRC grant, combined with income from private sector consulting, made it possible to make this ‘mid-career adventure’ possible without going into debt. The experience heightened his awareness, however, of how critically important it is that post-secondary institutions be equipped to offer financial support to their graduate students.

Late in 1999, applying to an advertisement in the Globe and Mail, Roy successfully competed for the position of Executive Director of International Relations and Chief of Protocol in the Government of Ontario. Later he served as Assistant Deputy Minister (Export Development)/President & CEO of Ontario Exports Inc., and later became ADM International Relations/Chief of Protocol. From there, in 2006, at the invitation of Global Affairs Canada (GAC, as it is known as in 2020) he rejoined the Department to return to the Embassy in Washington, D.C. as Minister (Congressional Relations and Public Affairs). From there, he went to Detroit to serve as Canada’s Consul General to Michigan, Ohio, Indiana and Kentucky (Michigan being Canada’s most significant trading partner in the world), where he was instrumental in negotiating the agreement with Michigan to build and jointly operate a new bridge linking Windsor and Detroit. The next stop was Chicago, as Canada’s Consul General to Illinois, Wisconsin and Missouri. In 2016, he agreed to become Canada’s Chief of Protocol, returning to Ottawa.  It’s a high profile (but crazy) job that involves coordinating all of the interactions between the Governor General, the Prime Minister, and GAC’s several Ministers and their international counterparts, whether abroad or at home.

In 2019, at his request, Roy was assigned as ‘Diplomat in Residence’ at the Balsillie School of International Affairs (BSIA) in Waterloo, ON. He’s now a (resident) Fellow there, and as Adjunct Assistant Professor also teaches at the University of Waterloo. He’s a Global Fellow of the Canada Institute of the Woodrow Wilson Center for Scholars in Washington, D.C., and a Fellow of the Canadian Global Affairs Institute. During her 3-day Golden Jubilee visit to Ontario in 2002, which Roy was responsible for coordinating on behalf of the Government of Ontario, Her Majesty, The Queen, made him a Lieutenant of the Royal Victorian Order – an honour that enables him to serve as a Voluntary Presiding Officer at Canadian Citizenship ceremonies, something he routinely does both in Kitchener and ‘remotely’. He’s a Churchill Fellow at Westminster College in Fulton, Missouri, and received other honours during his U.S. postings. Coming ‘full circle’, he serves as one of three Canadian members on the International Authority (overseeing implementation of the 2012 Canada-Michigan Agreement to build the new bridge). To the extent it’s imaginable, his enthusiasm for Canadian (& U.S.) political history, and for higher education generally, is equalled only by his affection for Golden Retrievers and baseball.

The decision to endow the Roy Brent Norton Graduate Scholarship in Canadian Political History at Carleton University was easy. His resources are modest; the U.S. institutions he graduated from don’t need his money. But Carleton, and grad students in Canadian history, could potentially benefit. His conclusion: if this could help enthusiasts of Canadian political history realize their academic dreams and position them well for rewarding careers, then no legacy could be more significant.

Awarded annually by the Dean of Graduate and Postdoctoral Affairs, on the recommendation of the Chair of the Department of History to outstanding graduate students entering or continuing a Masters or PhD degree in History. Preference will be given to students pursuing a topic related to the political history of Canada such as, but not limited to: the history of political parties, leaders and legislators; legislation and legislative debate, Canadian politics and elections at all levels of government; the founding of Canada and of Canadian provinces and territories; constitutional debates and reform; Canadian and provincial/territorial ‘nationalism’; foreign policy and international economic and trade policy, multilateralism/bilateralism; immigration and refugee policy; diasporas in Canada and the Canadian diaspora abroad.  Endowed in 2020 by Dr. Roy Brent Norton.