This R.D. Richmond Scholarship in Aerospace Engineering was endowed in 2002 through the generosity of Robert Dick Richmond, a pioneer of Canadian Aerospace. Since 2003, this scholarship has been awarded annually to an outstanding Carleton University student proceeding from third to fourth year in the Bachelor of Aerospace Engineering program. Each year, this scholarship recognizes and rewards students who excel academically within aerospace design-oriented courses and actively contribute to campus life and community through their involvement in extracurricular activities. 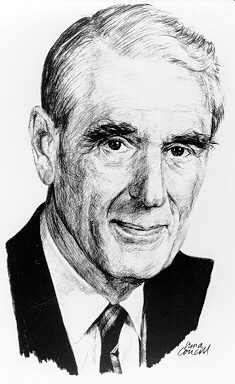 Following the completion of a Bachelor degree in Aeronautical Engineering in 1942 at the University of Michigan, Richmond began his career in the Mechanical Engineering Division of the National Research Council, where he worked on wind tunnel and flight test projects.

He then joined Fairchild Aircraft Ltd., where he later became the Chief of Aerodynamics for the Husky, a utility aircraft. In 1947, he became the Section Chief of Aerodynamics at Canadair LTD, advancing to Chief Development Engineer, where one of his projects was initiating and leading the preliminary design of the Tutor Trainer, used for the Royal Canadian Air Force’s Snowbird acrobatic team. In 1960, Richmond became Vice-President of Operations, and later a Director, for Pratt & Whitney Canada, where he directed the manufacture of the first 3500 PT-6 Engines and guided their marketing program. In 1974, Richmond became the President, and a Director of Spar Aerospace Ltd., where he established and was responsible for the first five years of the industrial organization that developed the Canadarm for the NASA Space Shuttle.

Richmond returned to Canadair in 1981 as the company’s Executive Vice-President and Chief Operating Officer. He is credited with turning the Challenger business jet into a strong international competitor by directing the development and completion of certification and delivery of CL-600 and CL-601 aircraft, which have been sold to corporations and governments in over 30 countries. In 1984, he initiated the design derivative of the CL-601, the Canadair Regions Jet, and continued as a consultant on its development past his retirement in 1988.  This airplane established the regional jet world market.

Richmond is a Fellow, one of the Founders and Past President of the Canadian Aeronautics and Space Institute, and a recipient of the C.D. Howe Award for Leadership in Aerospace.  He is an associate fellow of the American Institute of Aeronautics and Astronautics and is a past Chairman and Honorary Life Member of the Aerospace Industries Association of Canada. He was awarded an Honorary Doctorate in Engineering from Carleton University in 1998 and was inducted as a Member of Canada’s Aviation Hall of Fame in 1995.