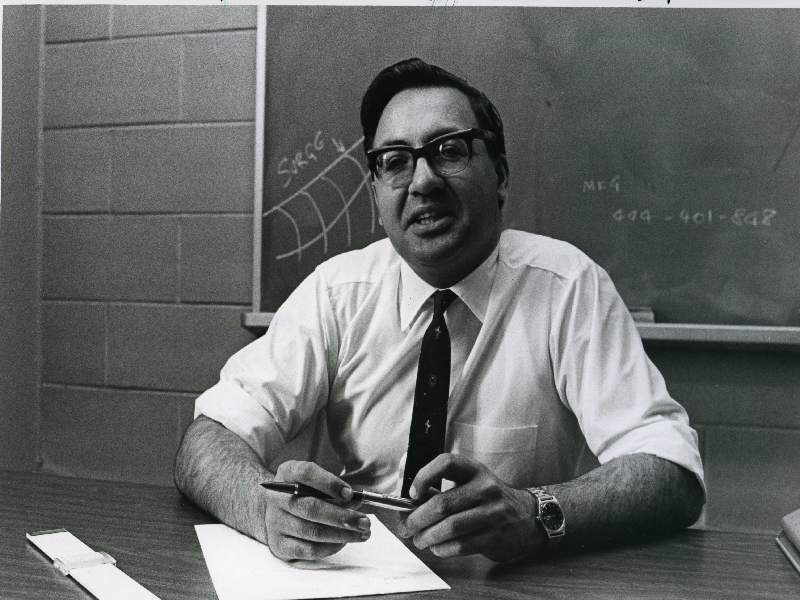 Click here to read ‘From Renowned Researcher to Philanthropist: The Legacy of Herb Saravanamuttoo’

Awarded annually, when merited, on the recommendation of the Chair of the Department of Mechanical and Aerospace Engineering to students proceeding from Third to Fourth year of the program. Selection will be made on the basis of high academic standing, with consideration given to demonstrated leadership in student societies. Endowed in 1998 by family, friends, colleagues and former students of Herb Saravanamuttoo in honour of his retirement after 28 years with the Department of Mechanical and Aerospace Engineering at Carleton University.

Dr. Saravanamuttoo received his Bachelor of Science (First Class Hons.) in Mechanical Engineering from the University of Glasgow in 1955, and later emigrated to Canada and worked for Orenda Engines Ltd. where he did pioneering work in the simulation of engine dynamics and the Avro Arrow project until 1964. This same year he joined the University of Bristol England as a lecturer and worked as a consultant to Bristol Siddeley on the Olympus 593, British Aircraft Corporation on the Concorde and Rolls Royce on the RB 211. He then obtained his doctorate from Bristol University in 1968.

Dr. Saravanamuttoo joined Carleton University in 1970 and spent the next 28 years as a professor, including 10 years as chairman of the Department of Mechanical and Aerospace Engineering. He was proud to have introduced the Industrial Experience Program in the Department of Mechanical and Aerospace Engineering in 1988, which eventually led to the co-op program across the university. Following his retirement, Dr. Sarvanamuttoo became a Professor Emeritus for the department, and extended his contributions as a sessional lecturer for the next 20 years.

Dr. Saravanamuttoo is best known for his authorship of Gas Turbine Theory. After completing his PhD, he joined the original authors in producing a Second Edition with major improvements resulting from his research. He went on to produce further improvements culminating in the Seventh Edition and translation into five languages. Gas Turbine Theory has been in continuous print since 1951.

Dr. Saravanamuttoo has been widely recognized for his contributions to his field. He was a Fellow of CASI, ASME, IMechE and the Canadian Academy of Engineering. Awards included the Guggenheim Memorial Lecture (2002), the McCurdy Award (CASI, 2005), R. Tom Sawyer Award (ASME, 2004), International Collaboration Award (ISABE, 2008) and most recently the 2019 Award of the International Society for Airbreathing Engines for ‘His Outstanding Contributions to Airbreathing Engine Technology’. In 1974, he was Founding Chairman of the NRC Committee on Industrial Gas Turbines, and was a Founding Director of GasTOPS Ltd. in 1980.