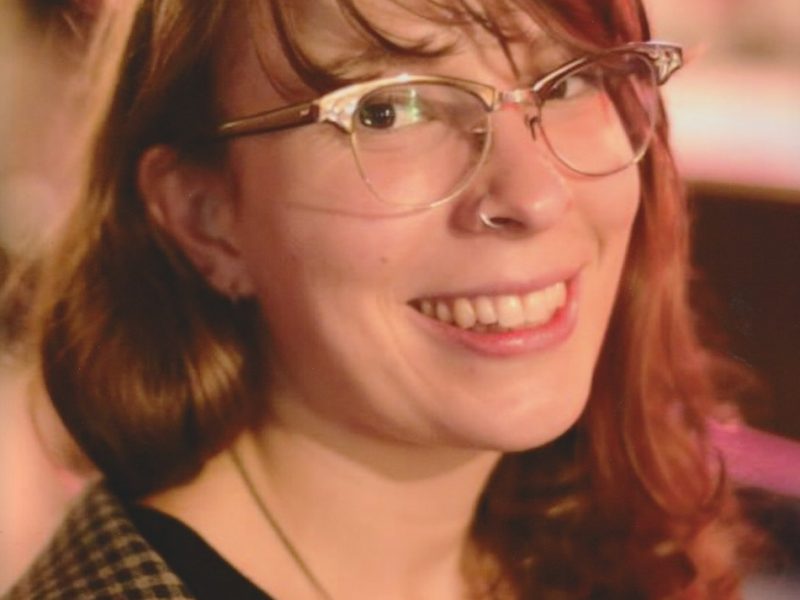 To honour the legacy of Joni Sadler, family and friends have established the Joni Sadler Memorial Bursary to continue her unfinished work by supporting future generations of students, entering or continuing in the Bachelor of Computer Science program.

Joni Sadler died suddenly and unexpectedly of a brain aneurysm in 2021 at the age of 35. Those who knew her often said, “Joni’s day is anyone else’s week.” Her work ethic was legendary, but even at a 7:1 ratio, death came much too soon.

Joni was a daughter, a scholar, a drummer, a proud alumna of Carleton (B.Comms ‘08, M.Comms ‘11) and a true friend. The only child of entrepreneurs who loved road-tripping, she took up figure skating at a young age; a competitor bent on excellence and self-improvement. That drive soon found purpose in the music and DIY punk scene in her hometown, Victoria, British Columbia. At 18, she moved across the country to attend Carleton University in Ottawa, where she worked at a record store and at CHUO 89.1 FM, the campus-community radio station at the University of Ottawa. She completed her BA in 2008 and MA in 2011, both in Communications; her Master’s thesis “Challenging Expectations: Perceptions Of Canadian Music and the Localized Practices of Experimental Artists” underscores the importance of authentic and defiant do-it-yourself production—an astute work that only gained more relevance in the ensuing decade. She then moved to Montreal to co-manage CKUT 90.3 FM at McGill University (from 2012 to 2017), did a stint as POP Montreal’s Symposium Director (2017 and 2018) and then became Director of Communications at Constellation, a world-renowned independent record label from 2017 until her death. Much of this she did while also playing drums in several bands, most notably the acclaimed artpunk band Lungbutter.

Joni was a tireless advocate for independent artists, and especially for her friends. She loved art and cared for the people who made it. She knew the power of community and dedicated herself to others through organizing and administering, while also a riveting performer in her own right. She may have embraced change and challenges better than most, but she wasn’t superhuman. When things got hard, she pushed harder.

During the COVID-19 pandemic, she threw herself into work at Constellation for the benefit of performers whose livelihoods were at risk, while also learning to code. Just before her death, she earned Concordia University’s Full Stack Web Development Diploma. This would have given her greater access to the means of online production underpinning more and more of music, and just about every other industry. Imagine what more she would have done.

Your contributions to the Joni Sadler Memorial Bursary will help ensure Joni’s memory lives on at Carleton University through an annual award to support undergraduate students in demonstrated financial need, who identify as women, and are entering or continuing in a Bachelor of Computer Science degree at Carleton University.