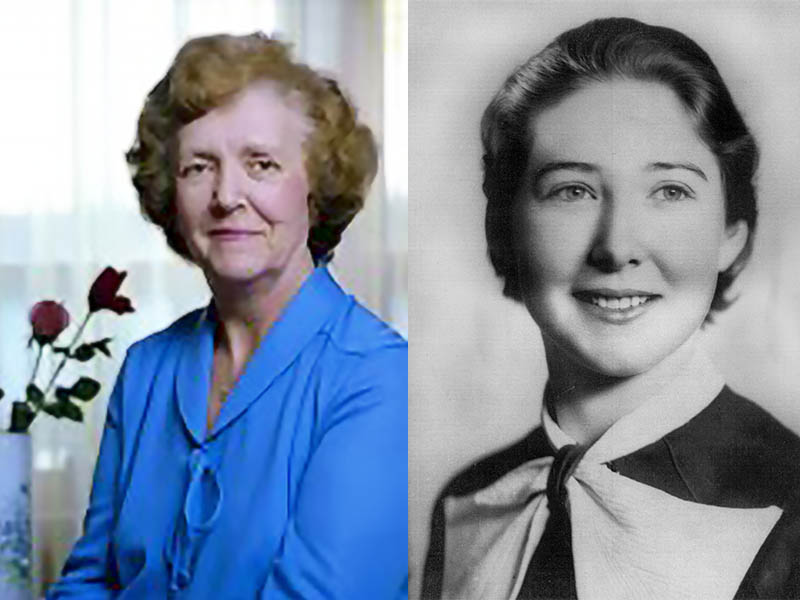 Value $1,000.  Awarded annually to an outstanding undergraduate student who is entering or continuing from one year to another in a Bachelor of Science degree in Neuroscience and Mental Health.  Preference will be for a student in demonstrated financial need.  Established in 2020 by Patrick Dion in memory of his paternal and maternal Irish grandmothers.

Eva Doran was born on November 11, 1917 in Midland, Ontario to an Irish father and French-Canadian mother. Exactly one year following her birth, the armistice was signed to end the Great War in Europe. Eva‘s children and grandchildren solemnly believe her mere earthly presence helped inspire that historical declaration of peace.

Like so many of her generation, Eva faced many hardships during her formative years. Living through the Great Depression and managing around the sacrifices of the Second World War, Eva steely faced and overcame the unique challenges of the mid-twentieth century.

Eva raised six children, supporting each in their pursuit of a formal education and encouraging their chase of meaningful careers. In each chapter of Eva’s remarkable life, kindness, progressiveness and adaptability distinguished her from her peers. And to her last breath, patience, grace and her twinkling-eyed wit endured.

A Carleton University undergraduate scholarship co-memorialized in her name is a fitting honour to a woman who—in a different era—would have excelled at post-secondary study, leaving no less a mark on professional achievement than she did upon the lives of the family she loved so dearly.

Elizabeth (Lily) Teresa McHenry was born on April 27, 1916 in Feeny, County Derry, Ireland to Sarah and John McHenry. It is worth noting that Lily, the fourth of eight children, was born in the centre of Easter Week, a week that historians identify as the short-lived Easter Rebellion in what was then a united Ireland.

As was common among Irish farming families in the north of Ireland during the Great Depression in 1930, Lily, her parents and siblings emigrated to Canada. Upon arriving in Canada, Lily was no stranger to hard work, and during her young adult years she was employed as a domestic and nanny. She was also adventuresome and courageous.  In 1939, Lily returned to her birthplace amidst the outbreak of WW2 with the terror of Nazi U-boats beneath the North Atlantic, to court and then wed James Patrick McHenry—a man of like surname but no kindred connection.

Lily remigrated to Canada in 1947 with James and their young family to settle in Sarnia, Ontario. She gave birth to nine children, and became a dedicated and loving mother, who always encouraged her children to be independent, embrace hard work and to pursue higher education to achieve their  goals. She loved her many grandchildren equally and was so proud of their maturing achievements. Lily was also a lifetime member and volunteer of her local women’s church league. She was admired and respected by all who knew her.

Lily would have been honoured and humbled to be co-memorialized by an academic scholarship established to assist aspiring neuroscience undergraduates at Carleton University.