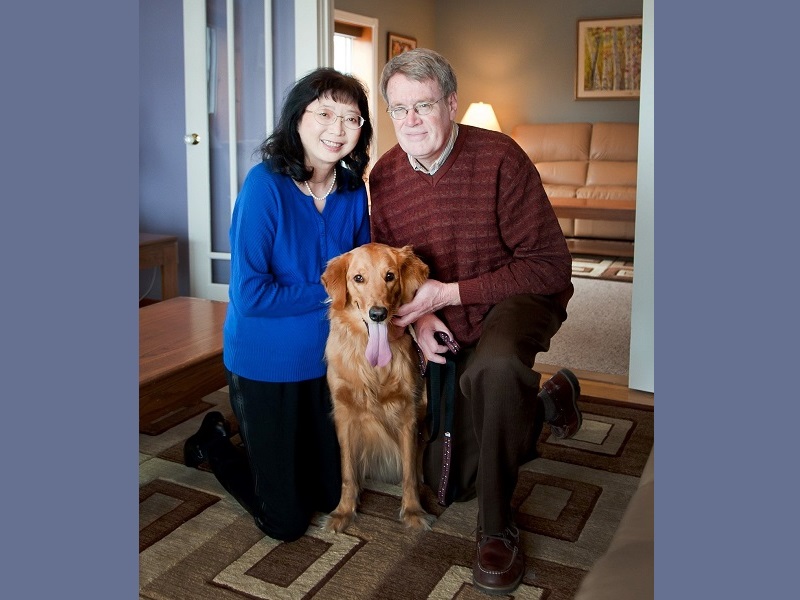 Robert Hiscott with his late wife, Eleanor and their golden retriever, Portia at their home in January 2017, shortly before Eleanor passed away.

My late wife and I were retired university professors – I retired from University of Waterloo in 2012, and my wife, Dr. Eleanor Chu, Professor of Mathematics, retired from University of Guelph in 2008.  At the time of preparing mirror wills, we mutually decided to leave a lasting legacy of financial support to future students at our first Canadian alma maters in the form of permanently-endowed scholarships for full-time undergraduate students in Sociology at Carleton (my first alma mater), and Physics or Mathematics at Acadia University (Eleanor’s first Canadian alma mater).  When Eleanor passed away, I decided to set up the scholarships at that time, rather than delay the process until my passing.  With the help of our lawyer, and the universities’ Planned Giving teams, these two endowed scholarships have now been set up at Carleton and Acadia Universities, respectively.  I was particularly pleased to learn that Carleton had a fund matching program in place for newly-established endowed scholarships, essentially doubling the initial value of the scholarship!  In time, each of these endowed scholarships at Carleton and Acadia Universities will be enhanced with a sizeable portion of the residue from my estate.

While I was taught by many fine professors during my undergraduate years at Carleton, I was most fortunate to have three mentor professors who were each tremendously important for my studies at the time and the future development of my academic career in Sociology.  In my second year of study at Carleton, I met Professor Bruce Macfarlane who introduced me to the substantive field of Sociology of work, occupations and professions, a research area I focussed on for the duration of my academic career.  (Professor Macfarlane also supervised my fourth-year honours thesis project which included my first venture in survey research).  In my third year at Carleton, Professor Terry Nosanchuk introduced me to social statistics and data analysis, topics I went on to teach at both undergraduate and graduate levels throughout my academic career.  In my final year of undergraduate studies at Carleton, I had the wonderful opportunity to serve as a research assistant to Professor Joseph Scanlon of the School of Journalism – through a wide range of projects which he directed through the Emergency Communications Research Unit (ECRU), I gained essential experience in the craft of field research and data analysis.

After Carleton, I continued with graduate studies at Queen’s University at Kingston (M.A., 1982), and University of Toronto (Ph.D., 1986), before pursuing an academic career, initially at Queen’s University (1985-1987), and then at University of Waterloo (1988-2012).  Between academic appointments, I spent a year (1987-1988) as a research scientist with the Institute for Market and Social Analysis (IMSA) which was the research and development wing of Compusearch Market and Social Research in Toronto.

My connection to Carleton University continued with the publication of my book, “Career Paths of Nursing Professionals: A Study of Employment Mobility” by Carleton University Press in 1998, with the considerable support and assistance of staff at that time including Dr. John Flood, Suzanne Williams and Jennie Strickland.  Beyond Carleton, I maintained a close connection to Ottawa through my consulting business (1997-2010), conducting many research projects for the Government of Canada related  to occupational products and services, especially the National Occupational Classification (NOC), as well as Electronic Labour Exchange (ELE), and the Human Resources Development Canada (HRDC)  Career Handbook.

Awarded annually to outstanding undergraduate students entering or proceeding from one year to another in the Bachelor of Arts degree in Sociology. Endowed in 2017 by Dr. Robert Hiscott, BA/80.