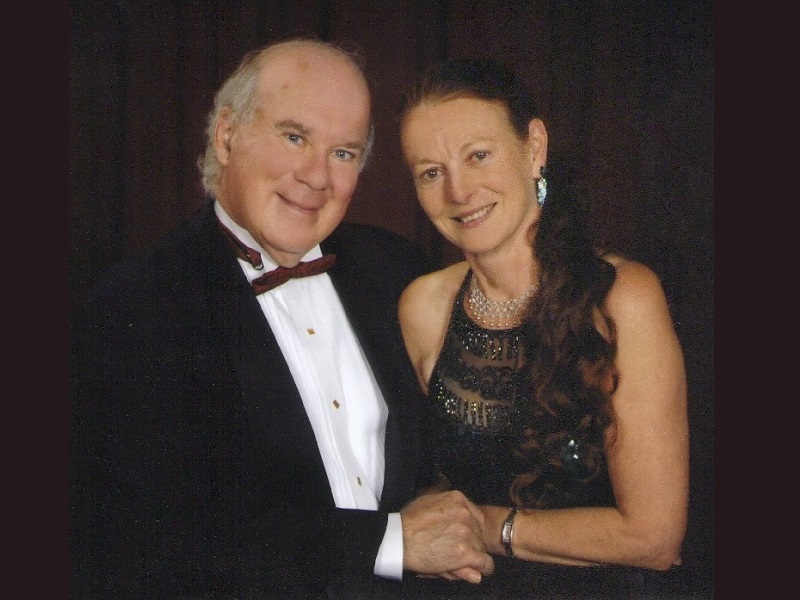 Martin Rudner and his partner of 21 years, Angela Gendron, at the OHF gala in 2007

As Professor Emeritus at Carleton University and Founding Director of the Canadian Centre of Intelligence and Security Studies, Martin Rudner’s expertise was sought around the world.  He was the prolific author of over 100 articles and books on a diverse and eclectic range of topics. He was a gifted teacher, assiduous researcher, enthusiastic project manager, a valued editorial board member of several journals and a communicator par excellence whose clear and succinct delivery on a range of topics – all without notes – won him many admirers.

Martin’s path to scholarship began in Montreal in the 1950s.   He was educated at the Hebrew Academy and McGill University in Montreal, and Linacre College Oxford, (M.Litt., 1965) before gaining a doctorate at The University of Jerusalem in 1974.

Five years as a Research Fellow/Lecturer at The University of Jerusalem was followed by a Senior Research Fellowship in the Department of Economics, Research School of Pacific Studies, Australia (1975-1979), after which he became Academic Assistant to the Vice Chancellor, The Australian National University (1980-1982).  His return to Canada was precipitated by the opportunity to work for the Canadian International Development Agency (CIDA) on development projects in South East Asia.

Concurrent with his work for CIDA, Martin was a Visiting Associate Professor at The Norman Paterson School of International Affairs, (NPSIA) Carleton University.  In 1984 he became an Associate Professor and in 1988 achieved Full professorial status.   In the shadow of 9/11, he redirected his energies in pursuit of a long-held interest in intelligence studies as the basis for acquiring in-depth knowledge and understanding of the issues and events which threatened national and societal security.  In 2002, having mobilized the necessary support and resources to establish the Canadian Centre of Intelligence and Security Studies (CCISS), he became its Founding Director.  Martin retired in July 2007 as Professor Emeritus and Distinguished Research Professor but continued to spend much of his time thereafter in reading and online research to keep himself and others informed of intelligence and security related issues, undertaking speaking engagements at international conferences, and on selective research projects.

As a colleague put it “Martin understood the importance of ‘knowledge’ as opposed to mere ‘information’ and how important the difference was to optimal decision-making.”  He recognized the significance of history and the social and cultural factors which underpinned new and emerging threats such as religious extremism, right wing militancy and societal polarization. He feared for the future of democratic governance given the rising incidence of fascism and religious intolerance.  Securing the safety and well-being of Canada and other democratic societies world-wide became Martin’s new mission.  Martin was also very proud to have acted as a Witness to various Standing Committees (National Security, Intelligence and Defence, Intelligence and Security etc.) in the House of Commons and served on the Commissions of Inquiry for both the Air India Bombing Flight 102 Investigation and The Arrar commission.

In the emerging security environment, breaking down information silos and learning from each other was to become the imperative.   Elected Vice-President and then President of the Canadian Association for Security and Intelligence Studies (CASIS) he transformed it from an intimate academic association of Canadian scholars, to an international knowledge-sharing forum which welcomed anyone with a professional interest whether from government, academe, industry or intelligence and oversight organizations.  It was a unique forum which attracted participants from around the world.

The quiet confidence and determination with which Martin pursued the many information-sharing initiatives sponsored by CCISS derived from a lifetime of reading and research and the knowledge and wisdom gained by an exposure to, and appreciation of other countries and cultures.  He was a committed internationalist and gave generously of his time and knowledge to all who sought his help or asked to be added to his ever-growing ‘distribution’ list on which he posted subject-specific, carefully selected articles, reports and comments gleaned from sources around the world.  Canadian and international governments, academic colleagues and the media soon looked to him as a knowledge bank and sounding board.

Nowhere was his enthusiasm for sharing knowledge more evident than in the numerous presentations he gave in classrooms and conferences; his broadcast television and radio interviews also generated favourable responses from across Canada. Based on carefully checked facts as opposed to speculative comment, the interviews he gave made complex issues accessible to the general public and professionals alike.  He was an original, thought provoking speaker, who could be controversial when appropriate.

Martin’s earlier research papers on International development issues covered the various economic, social and political dimensions of Burma, Singapore, Japan, Malaysia and Indonesia.  Latterly, his research work focused on topics in the emerging specialism of security and intelligence studies which had long been described as the ‘missing dimension of international affairs.’  University authorities were inclined to look askance at any expansion of ‘Intelligence’ courses (then confined to intelligence history) while academics in other fields were protective of scarce resources.  But as Director of CCISS, a self-financing research centre, Martin’s own work and the papers he commissioned on intelligence and security issues from other scholars encompassed a broad range of topics and gave new impetus to ‘intelligence and security studies.’

Apart from the history and organization of Canadian intelligence agencies, their roles, responsibilities and relationship with others in the “Five Eyes,” Martin’s published papers included several on signals intelligence and communications technologies; terrorism and the nature of emerging threats across the political spectrum; the education  of intelligence analysts and methodologies; financial intelligence and multi-disciplinary research papers on security and resilience issues intended to support the Canadian Oil and Gas Sector.  Comparative research papers relating to the protection of critical infrastructure and security practices in other oil producing countries aimed to identify best practice in information sharing between public and private sector entities, risk assessment and management, the security of control systems and cyber networks and the legal and ethical responsibilities incumbent on industry and government.

The launch of a Master’s degree in Infrastructure Protection and International Security (MIPIS), which was the first of its kind in Canada, was Martin’s particular legacy to Carleton University.  It involved both NPSIA and the Faculty of Engineering and Design (FED) in bringing together students from both policy and engineering backgrounds and providing the multi-disciplinary knowledge necessary for future analysts and engineers.  From an original cohort of ten students it has grown significantly and today, demand for places outstrips supply.

With retirement approaching, CCISS and the Canadian Courts Administration Service jointly convened what Martin described as his farewell conference, a prestigious event on ‘The Administration of Justice and National Security in Democracies.’ Held at Carleton University, it brought together members of the judiciary, government officials and academics from democracies around the world including the Chief Justice of the Supreme Court of Canada and senior judges from five other countries.  The objective was to share views on the continuing importance and ongoing challenges to the administration of justice and the rule of law in the context of modern threats to national security, in particular, transnational Islamist terrorism.

Martin dedicated most of his waking hours to his work, but he also maintained long-standing interests in the history and archeology of Judaism and Islam, Persian carpet art, and the art and artefacts of South-East Asia.  One his publications, “Persian Carpets of the Pahlavi Dynasty (1925-1979),” was a commissioned piece of research which was eventually published – an indication of his considerable expertise.  He once gave a talk at a London Club on the motifs in Persian carpet art.  A major importer of Persian carpets agreed to provide fifty ‘examples’ which were then hung in the Club ballroom for demonstration purposes.  The audience was spellbound as his faced glowed in his enthusiasm and appreciation for a culture far removed from his own but which he clearly felt was a legacy to us all.

Even in retirement when his sight was failing and cancer was taking a hold, Martin continued to send reports to those on his distribution list though barely able to read them himself.  He and his partner Angela, travelled to Norway, Japan, St. Petersburg and Turkey after his retirement but despite everything those countries had to offer, he treasured most the opportunities such travel offered for renewing exchanges with former colleagues.   He was a brilliant scholar, self-effacing, hardworking and ambitious only in his search for wisdom, knowledge and understanding.

Awarded annually by the Dean of Graduate and Postdoctoral Affairs, on the recommendation of the Director of the Norman Paterson School of International Affairs (NPSIA) to an outstanding graduate student enrolled in either the intelligence and international affairs field, or security and defence field, and with an interest in intelligence and security research. Endowed in 2021 by the Estate of Dr. Martin Rudner, Professor Emeritus and Distinguished Research Professor at NPSIA in the Faculty of Public Affairs. Dr. Rudner’s research and writing explored issues of intelligence studies, international intelligence relations, terrorism finance, terrorism and counter-terrorism, critical energy infrastructure protection policy and intelligence accountability and oversight.