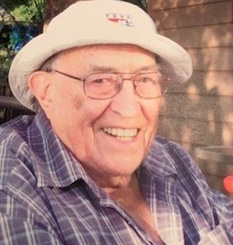 Claude saw education as a fundamental value to be nurtured and supported throughout his long life. It started with his mother, a teacher at the age of fifteen in England, who championed the importance of education to her two sons. Both became teachers. It did not stop there; Claude’s son, his daughter-in- law, his grandson and his niece all became teachers as well. You might say the family business.

Claude joined the Carleton University Board of Governors in 1969, which was a step that reflected this fundamental value. He served a number of terms as a member, as well as Board Chair from 1985 to 1987. He never had the opportunity to go to university as a full-time student, instead he took courses as a mature student. He realized how difficult it could be for some deserving students to raise the funds to achieve their potential, so in 1996 he sponsored the establishment of the bursary that bears his name.

One of his proudest moments was when he was awarded an honorary doctorate from Carleton University, in 2001. We, as a family, are proud of his many achievements and wish to carry his legacy forward by continuing to support the Claude A. Edwards Bursary.

Awarded annually to deserving full-time mature students who are in need of financial assistance to continue their studies. Recipients will demonstrate financial need, must be Canadian Citizens or permanent residents of Canada (landed immigrant or a protected person), and must meet OSAP’s Ontario Residency requirements. Established in 1996 by Claude A. Edwards, former Chair of the Board of Governors.