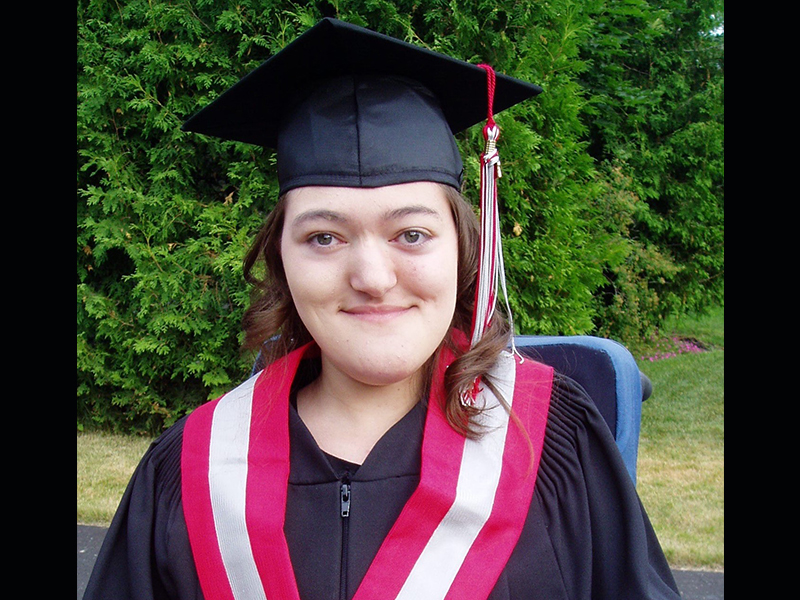 Chloe Graf rarely let much stand in her way. “Determined’ was definitely a word that you would use for her,” recalls her mother, Pauline Graf, with a smile.

“She was very strong willed, but that was great,” says her father, Dr. Daryl Graf, prompting a rueful laugh from both parents.

Chloe passed away in 2017, due to muscular dystrophy, at age 26. When she was born, doctors gave her four years to live. Instead, at four, she received an electronic wheelchair and immediately embraced the freedom it offered. She and the family’s golden retriever, Tawny, became well known across their Ottawa neighbourhood as they took long walks together.

Chloe’s affection for animals extended far beyond Tawny. When she came across YouTube videos about disabled animals in India, she did extensive research, then donated money to the Indian charity that had posted the videos.

In a way, Chloe will continue to give through the Chloe Graf Memorial Scholarship which was established by her parents and her grandfather, Robert Blair.

An avid reader who received Carleton’s John and Carol Strong Book Prize for outstanding writing, Chloe was interested in both programs and was close to earning her B.A. in History when she passed away.

“I remember Chloe talking often about how she longed to know what the emotional lives of others were like in ages past throughout the ancient world—how she wanted to slip into their lives and really feel what they felt for a day,” said Daryl in his eulogy for her.

When she chose to pursue that interest in Carleton, she was adding to the Graf family’s longstanding ties to the university. Daryl earned his master’s and Ph.D. in computer science at Carleton, Pauline studied there, and Chloe’s sister Alex is an alumna, too.

As well as studying, Chloe relished the independence she enjoyed at Carleton, where she lived in residence, joined a wheelchair hockey team and became a strong advocate for LGBTQ+ issues.