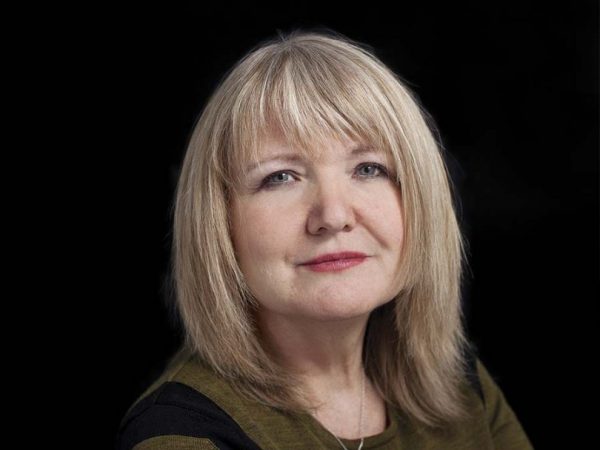 In February of 2020, Canada lost one of its most talented, passionate journalists.

Maclean’s senior writer and columnist Anne Kingston passed away from cancer, leaving behind an incredible legacy of perceptive, intelligent reporting on some of the most important issues of our times.  (You can read about Anne’s inspiring work and life below.)

This memorial fund in her name is meant to honour Anne’s legacy and to do something that meant most to Anne – support other aspiring journalists. In these times, we need courageous, empathetic and truth-seeking storytellers more than ever.

The Anne Kingston Memorial Fund will provide opportunities to students at Carleton’s School of Journalism to contribute to the incredible “They Were Loved” project.  This collaboration between Maclean’s, the Carleton School of Journalism and other journalism schools across the country, will pay tribute to every person who has, and will, pass away from Covid-19. The selected students will work directly with Katherine Laidlaw, Journalist in Residence, as digital editors, gaining invaluable experience to bolster their journalistic pursuits and career.

By supporting this fund, you’re doing what Maclean’s editor Alison Uncles suggested we do to pay tribute to Anne’s life and impact: “Do something today that lifts a young journalist up, anything at all.”

“I miss Anne dearly and think of her daily. She was truly unique and special.  Always there  for me, as I tried to be for her. Her talents were many, and I was fortunate enough to witness these in full display as we grew up together. Even as a child, Anne would challenge adults if she heard something that she considered to be detrimental to others, hands placed on her hips while looking her ‘opponent’ square in the eyes. And she remained equally fearless as a journalist, never being afraid to rattle cages or to poke sacred cows.

The outpouring of respect after her sudden passing was both amazing and strange to me: while the broader world saw Anne as an accomplished journalist, to me she was simply my amazing big sister who just happened to write as her occupation. To paraphrase Walt Whitman, ‘Anne contained multitudes.’

May she be remembered for her many contributions to journalism, and for how she deeply touched many people’s lives, mine included.”

Anne’s extensive body of work across four decades includes impactful stories on contemporary culture, politics and medical issues. She covered the trials of Jian Ghomeshi and Bill Cosby, as well as the progression of the #MeToo movement. Prior to her 14 years at Maclean’s, she also held senior writing and editorial positions at The Globe and Mail, the National Post and Saturday Night.

Here is a glimpse into Anne’s writing from her Maclean’s July 2019 cover story: “The world is broken—and human kindness is the only solution.”

Anne wrote two books: The Meaning of Wife: A Provocative Look at Women and Marriage in the 21st Century and The Edible Man: Dave Nichol, President’s Choice and the Making of Popular Taste, winner of the 1995 National Business Book Award.

Broadcasting was another interest of Anne’s; she was a frequent commentator on TV and Radio and co-hosted Maclean’s Bibiliopod podcast.

Always eager to share her passion, wisdom and kindness with other colleagues and journalists, she was also a visiting lecturer at the University of Toronto, speaking on #MeToo and the Media.

Anne won several journalism awards during her career and last year she was shortlisted for the 2019 Landsberg Award, an annual prize awarded by the Canadian Journalism Federation (CJF) in association with the Canadian Women’s Foundation, to a journalist whose “exceptional research, analysis and presentation through a gender lens” provides “greater profile to women’s’ equality issues.”

Anne is greatly missed by her Maclean’s colleagues; read this sample from her 15-year Maclean’s career and this tribute to her compelling voice and storytelling.

Anne subscribed to the Shine Theory, which can be best explained by its core principle, “I don’t shine if you don’t shine.”