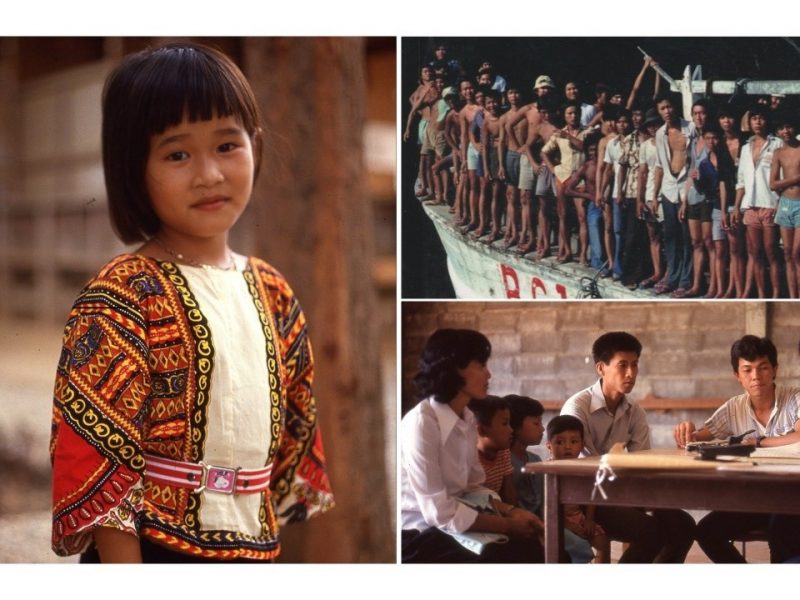 Hearts of Freedom is hosted in the School of Social Work at Carleton University. The principal researchers are Colleen Lundy and Allan Moscovitch, both Emeritus Professors at the university. The primary purpose of this three-year project is to collect and preserve the personal histories of refugees from the former Indochina (Vietnam, Cambodia and Laos) who came to Canada between 1975 and 1985 and the Canadians who assisted them. More specifically these video-taped oral history interviews document the conditions that prompted he exodus, the migration journey to and arrival in Canada, and the resettlement experience. All interviews and other materials are being placed on a website for the project which can be found at https://heartsoffreedom.org/

The project benefits from the partnership and active involvement of the Vietnamese http://vietfederation.ca/ , Cambodian http://caov.org/blog/   and Lao https://facebook.com/laoottawavalley  Associations/national and local associations, the Canadian Immigration Historical Society, http://cihs-shic.ca/  and guidance by museum advisors in the Canadian Museum of History, https://www.historymuseum.ca/ and Canadian Museum of Immigration at Pier 21 https://pier21.ca/home/ .

Along with preserving the experiences of these three communities, the project will inform academics, historians, policy makers and settlement practitioners. Among the outcomes of the project are a documentary, a book, in both English and French, and educational materials for universities and high schools. All the interviews and materials will be permanently housed in the archives at Carleton University https://carleton.ca/ .

By October we will have interviewed 125 people – former refugees, sponsors and government personnel in the Ottawa/Montreal/Toronto/Winnipeg areas.

With further funding provided by you the donor, we will be able to make this a truly national project and conduct interviews in Edmonton, Calgary and Vancouver.

The end of the Vietnam War and the subsequent exodus of civilians from South East Asia resulted in a refugee crisis as people fled by boat or travelled by foot over the mountains. Many perished in the small, overcrowded boats that were not seaworthy. Those who survived the journey ended up in refugee camps in Thailand and Malaysia before acceptance into western countries.

Private sponsorship of refugees by non-profit organizations or groups of 5 or more adults was introduced in the 1976 legislative changes to the Immigration Act and became crucial to the transfer of these refugees to Canada. Canadians from all walks of life and in all parts of the country sponsored, welcomed and assisted refugees in adapting to a new life in this country. This was recognized in 1986 when the UN High Commissioner for Refugees awarded the prestigious Nansen Medal to the “people of Canada” a unique and singular honour.

The goal of Hearts of Freedom is to create an awareness of Canada’s historical role in successful refugee settlement by recording, analyzing and preserving the experiences of refugees and those who helped them.

A Community Coordinator will notify the Cambodian, Laotian and Vietnamese communities in Halifax, Calgary, and Vancouver about the project and recruit people to be interviewed.

Between January 1 to March 1, 2020, 3 week-long trips will take place to Halifax, Calgary, and Vancouver. Our aim is to complete approximately 45 interviews (33 former refugees and 12 people who assisted them). The cost of a one-week trip is approximately $7000 and includes pay for each of two interview team members, their travel, and their accommodation. There is a small additional cost for a gift for interviewees.If there are funds remaining after the additional interviews have taken place, they will be put towards the preparation of the Hearts of Freedom website, and a documentary based on the interviews and other materials made available to us by interviewees.

The funds from Future Funder would ensure that former refugees in the west and the east will be included in this project which will preserve the historical memory of their experiences, of their sponsors and of the government and NGO personnel who assisted them. The project will preserve their history for decades to come and become part of the settlement narrative in Canada.

As Canada faces another global refugee crisis that is producing an unprecedented number of refugees, there is an opportunity for Canadians to learn from the not so distant past. Current and future settlement responses during migration crises will benefit from a greater awareness within Canadian society of the experiences of the refugees from the three countries.

There are currently no updates available

Thank you to all our donors, this project has expired.