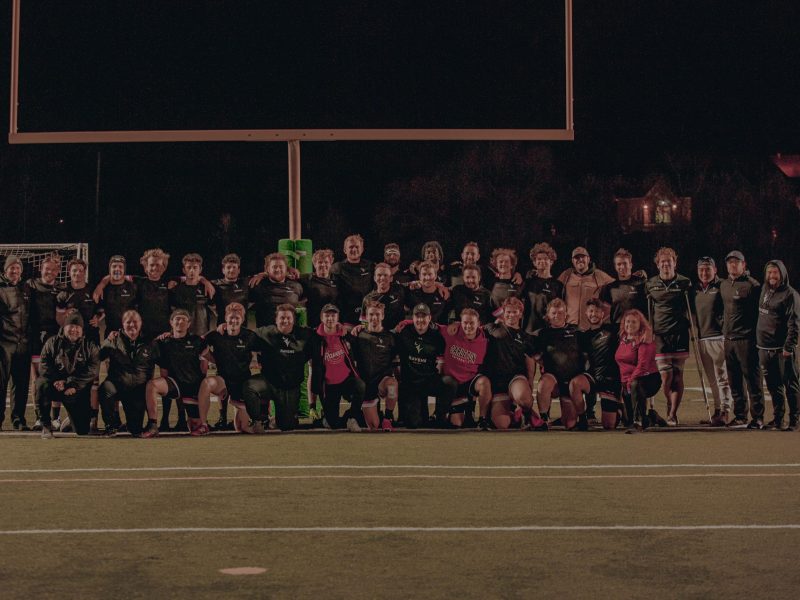 Under student management and the leadership of Head Coach LeeAnn Napiorkowski, the team has grown in both membership and in competitiveness. Between 2018 and 2020, the team posted an 11-1 record and claimed back-to-back Scholar’s League titles. The team then went on to have a successful season of growth post-COVID-19. After proven success and development year after year, the Men’s Rugby Team has been able to move up and into the RSEQ where they now compete against varsity-caliber men’s programs.

Our team consists of nearly 50 dedicated and hardworking Carleton University student-athletes who balance their sport with work, school and volunteering. As a club, we also help to facilitate Ottawa Mixed Ability Rugby, which looks to bring the world of rugby to everyone, specifically those with physical and mental disabilities.

Since our club is relatively new, our alumni group is rather small. Because of this, our team relies heavily on individual player dues as well as the generous support of donors to ensure its players can represent Carleton to the best of their abilities.

As a competitive club, our player dues cover the costs of busses, field rentals, player uniforms, and other kits (hoodies, t-shirts, etc.), as well as financial compensation for our coaches

Funds raised through this campaign will go directly towards subsidizing the growth of the Ravens Men’s Rugby Program over the next few years. It is important to us that rugby be inclusive to all those who wish to play, regardless of the financial barriers.

Most specifically, this fund will minimize the cost of play for the students that make up our club as well as subsidize the cost of new equipment, field rentals, and travel expenses.

Through your donation, you are helping to make sports more accessible for all. By supporting the Ravens Men’s Rugby Program, you are not only supporting the rugby community as a whole but you’re also helping the dedicated young men who make up our team.