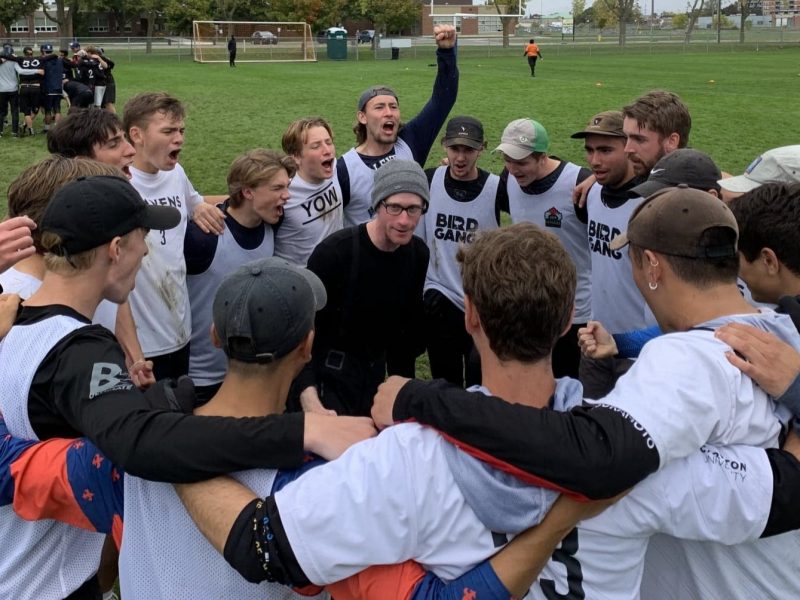 Believe it or not, the game of “Frisbee” is not just something people play at the beach! Ultimate Frisbee is played worldwide, by all ages and all skill levels. It is a self officiated sport that relies highly on honesty, fair play and “spirit of the game”. A result of these character-traits, the sport has developed a sense of community within its players that welcomes everyone to play our unique and enjoyable sport.

Here at Carleton University the Men’s Ultimate Program is a competitive club that invites students with all experience levels in the game to tryout and hopefully be accepted onto one of our two teams. Our program includes a highly competitive “A” team, and a development focused “B” team. As a competitive club, our teams travel to three tournaments across Ontario and Quebec during the fall where we compete outside against fellow university teams from across Canada. Our season does not end when the snow comes however, during the winter months we compete at three more tournament held inside.

Over the course of the school year, our program becomes a prominent part of members’ lives. Through practices, meetings and tournaments we build a sense of community that engages the student-athletes to bond with one another and often become lifelong friends that not only keeps them returning to our program, but Carleton University in general!

Outside of Carleton, either during the summer months or after graduation, we encourage our players to become integrated with the Ultimate community that can be found in almost every town and city. There are numerous opportunities to continue playing ultimate throughout ones life, in Ottawa for example, the Ottawa-Carleton Ultimate Assocation (OCUA) has recreational leagues almost every day of the week, on top of multiple competitive teams that travel to compete against others.

Over the course of our season and school year the financial demands associated with playing Ultimate become a concern for many of our student-athletes. The purpose of this campaign is to raise funds that can be put towards team jerseys, travel expenses, and tournament registration costs.